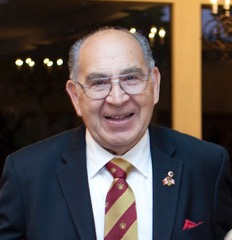 Miguel Milla-Leon, 85 was born December 20, 1933 in Lima, Peru. He moved to the United States in 1955. In 1957 he joined the Army and completed his basic training in Fort Ord, CA. While he was in the Army, Miguel met his future wife Ruth. Miguel’s children, grandchildren & great grandchildren were his pride & joy. The legacy of his strong family ties will live on through them. With pride, he served as Worthy Sir Knight Miguel Milla-Leon 4th Degree with the Knights of Columbus; Past President of the Club Peruano Americano,  and was also a member & volunteer with the Salinas North Lions Club, the Moose Lodge and the American Legion. Miguel was an avid Golden State Warriors fan. Having his family share in his enthusiasm of the team made it even more enjoyable. Miguel previously owned Milla’s Cycle & Sewing Center and currently owned Andersen’s Lock & Safe. Although the business has been around for 73 years, Miguel was the proud owner for the last 38 years. With the help of his sons Mike, Jorge, Oscar & Marco, it became the success that it is. Miguel loved spending time with family & friends. He enjoyed nothing more than an interesting conversation & sharing jokes with everyone he met. He enjoyed all types of music with Salsa being his favorite, where he loved dancing the night away with Ruth. After a brave battle with cancer, Miguel Milla-Leon was given his wings and called to heaven on April 24, 2019 surrounded by his loving family. Miguel
is survived by his loving and devoted wife of 61 years, Ruth Milla-Leon; his children Miguel (Mike) Milla-Leon (Marie); Jorge Milla-Leon (Leigh); Carol Jensen (Kurt); Oscar Milla-Leon (Stephanie); Marco Milla-Leon (Carrie); 15 grandchildren – Christopher  Milla-Leon (Anna), Melissa Fink (Tracy), Kristina Hayes (Neil), Anthony Ocampo (Yvette), Lynnsey English (Charles), Robert Milla-Leon, Maria Milla-Leon (Atley), Matthew Milla-Leon, Shane Jensen, Brielle Milla-Leon & Caden Milla-Leon and Scott and Amber Kastings Josh Burnett(Lina), Tiffany Burnett(Emmanuel).  10 great grandchildren – Kaleigh Sims, Kayla & Gavin Hayes, Avreigh, Zaiden & Kyler Ocampo and Patrick & Lillian English, Charlotte & Carolina Burnett. Miguel is also survived by his brothers and sisters: Robert Milla-Leon (Daisy), Rosita Munoz (German), Herbert Milla-Leon (Gaby), Jose Milla-Leon (Flor) and Paquita LaTorre (Oscar), along with numerous nieces, nephews, great nieces and great nephews.

In lieu of flowers, the family is asking you to consider donating to the American Cancer Society or Central Coast VNA & Hospice. Miguel will be missed more than words can describe but he will never be forgotten.

To send flowers to the family of Miguel Milla-Leon, please visit Tribute Store