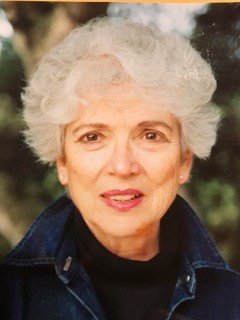 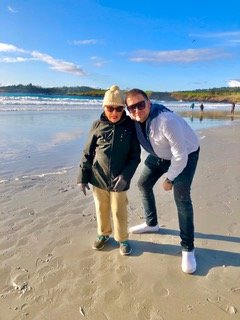 Carolina Bayne left us in body on February 8, 2020 unexpectedly from a fall in “her” casita, resulting in a coma and quick passing, just as she would have wanted.  Our beloved mother was born in San Jose, September 14, 1927 and died at age 92 ½ years young.  Her mother, Rosa Ferri, arrived at Ellis Island in 1911 at age 12 with her mother and younger sister from the little town of Tricarico, Matera, Basilicata, Italy.  Her father, Dominic DiGiovanni came through Canada at age 19 from Nociano, Pescara, Abruzzi, Italy, in 1906 serving in World War I for America, then made his way to San Jose, CA by working on the railroad.  Carolina grew up watching her parents walk to the elementary school across from the house they built to vote, something that made a lasting impression on her.  Nothing affected young Carolina more than the Great Depression though. Her family had the roots, knowledge and drive to raise their own food in their family orchard, garden, hen house, wine cellar, utilizing their outdoor wood burning oven, grain grinder, cold storage area in the basement in addition to trading with neighbors, canning, curing, drying and storing organic staples.  She continued growing and accessing organics her entire life.  She was a life long advocate of daily exercise and good nutrition, and practiced this religiously.

She followed in her sister Marianne’s footsteps and went to the 3 year nursing program at University of California, Berkeley (Cal) in 1945. She lived at Mary’s Help Hospital in San Francisco, working 8 to 10 hour shifts and studying her practicum around her working hours, taking the train to Cal as needed for course work, and being the doubles tennis partner for then amateur tennis champ, Pancho Gonzales.   She was in a cohort of five nursing interns and they remained friends throughout their lives. The house mother who watched over these five in the basement of Mary’s Help took Carolina to Carmel via train to give her a break from the overtime duties she earned for being so proactive in her job.  She was and has always been an agent for change to “make-things-better”.  This started her love affair with Carmel.  She became certified as an RN in spring of 1949 and began a night shift in the ER of San Jose County Hospital, where she was introduced to Rodney Bayne, marrying in 1950 and honeymooning on the Monterey Peninsula.  Rodney and Carolina had three children, Michael (Kimberly), Michele Bayne Pollock (Ambrose), and Mark (Tracie), four grandchildren and eight great grandchildren.

She raised her family in San Jose, worked as a RN continuously in a variety of positions and lived in Littleton and Denver, CO for 3 years in the 1960’s while Rodney was working with a land development team in Greeley, CO.  After returning to San Jose, the family made frequent trips to Carmel, visiting house mother Ellen Reynolds, purchasing their first house on Carmelo Street in 1967, moving there full-time in 1972, when she began working at CHOMP in the ER.  She became Employee Health Nurse, Industrial Safety Director and cherished her time at CHOMP. Also during this time, she and Rodney began purchasing original Carmel cottages, renting to locals at a reduced rate (the original rent control), traveling to Hawaii, Switzerland and Italy and up and down California.  She also travelled to Dinuba on many weekends for a 5 year period to her 25 acre orange orchard and farm house. Upon retiring from CHOMP, she assisted other physician’s in building their practice, continued her orcharding and gardening, studied for and became a Master Gardener through the UCSC program, after completing her daily three mile walking loop from her house, to the point and back along Scenic Avenue, where she met and maintained friendships for life.  Prior to retirement, she ran this loop daily before her day at CHOMP began.

Carolina, the petite, classy fashionista was by all accounts a spitfire of a lady.  She cared deeply for others, and was a mentor to a plethora of relatives, colleagues, neighbors and strangers.  Her observations, intellect, energy, drive, talents, skills, gifts, activism and generosity knew no bounds.

Her husband Rodney, predeceased her in 1996, as did her brother Phillip, sister Marianne, nephew James and niece, Jody.  She delighted in the companionship of her Dutch beau, and athletic partner, Rob Colyn over the past 18 years.  Her family in Italy are deeply saddened.

Truly, this petite, dynamic bundle of energy impacted a multitude of lives and will be forever cherished and missed.  May you have fair winds and smooth sailing dear Carolina and enjoy the fruits of your labor!  “Sweet Caroline, good times never seemed so good”!

A Celebration of Life will be announced at a later date in spring time or early summer, her favorite time of year.  She would love any memorial donations be made to The Homeless Garden Project,

To plant a tree in memory of Carolina Bayne, please visit Tribute Store

Share Your Memory of
Carolina
Upload Your Memory View All Memories
Be the first to upload a memory!
Share A Memory
Plant a Tree