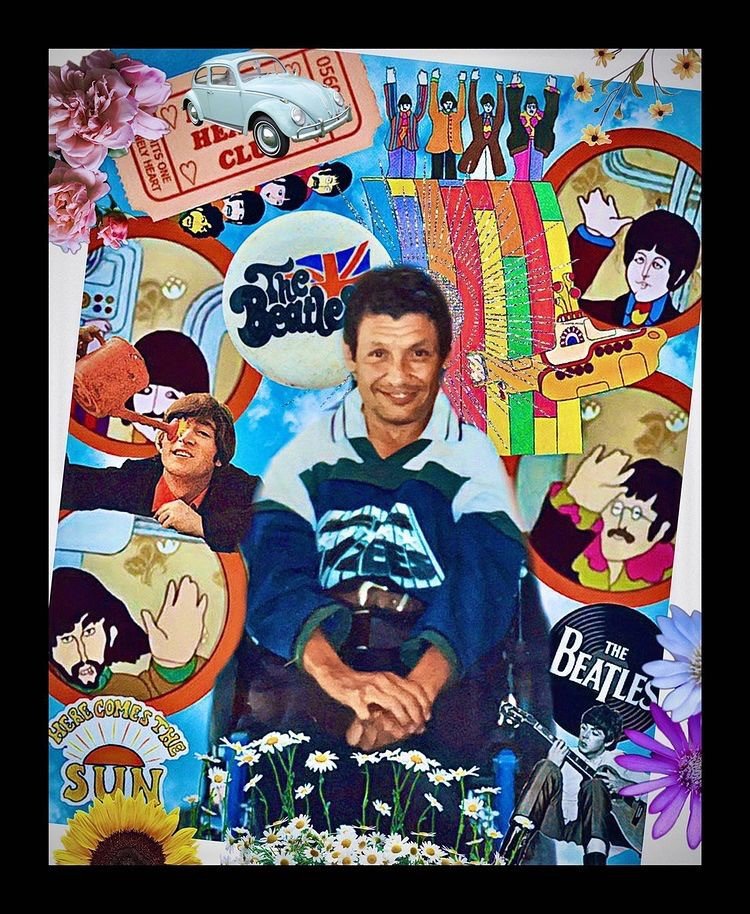 Obituary of Joel A. Ruiz

Here comes the Sun. The celestial curtain of eternal life was lifted for the arrival of our beloved Joel Antonio Ruiz on January. 5, 2021.

His spirit lives on in his four sisters Elsa (husband Cip Arroyo, daughters Melissa and Julissa), Martha (daughter Maria, sons Aris and Hank) and Gloria (husband Robert Valdivieso, daughters Lydia, Susana, Lupe, Elisa, Rebeca, and Gabriela), as well as his brother Enrique (daughters Laura and Sonia, sons Salvador and Enrique Jr.). He is also survived by nieces and nephews Violet, Olivia, Thomas, Adelina, Lorenzo, Genoveva, Adriana, Angelica and Mercedes, in addition to many great nieces and nephews too numerous to name. Our family extends our heartfelt gratitude to Debbie Gallegos, Joel’s caregiver and dear friend. We come together right now, over you.

Joel in the sky with diamonds, is lovingly received by his dear mother Mercedes King, his brothers Xavier and George Garcia, his nephews Marcos Garcia, Sam Dakis and Xavier Garcia, John Lennon and George Harrison.

Joel’s strong spirit made its way across the universe on a yellow submarine until arriving on Earth, Salinas, California to be exact, on June 13th of the year 1952. He went against the odds from day one. He weighed only a pound and a half and was incubated for 3 months. Before turning a year old, he was diagnosed with cerebral palsy and doctors said he would not live past five years old. In the years to come he would undergo numerous surgeries that would be not only painful for him but for his mother who wished she could relieve his agony. But not everything was pain, Joel had plenty of typical, joyful, at times naughty, childhood experiences like going to summer camps at Mount Hermon or pulling his sister’s hair when they played and fought. He had an ear for music and singing. Joel would grab a microphone any chance he’d get. Despite his challenges, Joel was always a smiling, happy boy.

He attended Ashton School until his graduation day at the age of 21. He went on to work as an educator for Salinas City Elementary School District up until he retired 25 years later. He hated calling in sick to work, his dedication was something to be admired. Somedays he would leave his home in East Salinas as early as 5:30 am to arrive to work at Monterey Park Elementary School riding his wheel chair. Much to the unease of those who loved him, Joel rode his electric wheel chair like it was a race car! He’s got a ticket to ride, and he don’t care! Unfortunately, his family’s fear was realized, when he was hit by a car, not once, but twice. Still, this did not deter his daring, independent spirit. One could say Joel’s condition made him protect his self-sufficience and independence all the more. He could not stand to be coddled or told what to do. Let it be!

Here, there and everywhere, Joel could always be seen in his loved East Salinas, visiting all his friends and tending to his errands. You knew it was Joel when you caught glimpse of his tall Mexican and American flags attached to his chair. These were not only an expression of the pride he had for his heritage, but a way for drivers to see him from a distance. Joel enjoyed his hobby of DJing and emceeing. He loved old Mexican movies and belting out rancheras. You never had to wonder what he was thinking, he was blunt and to the point. And if you haven’t figured it out by now, he was The Beatles’ biggest fan! We’re so grateful to know that we will feel his presence every time we listen to their songs.

Though our hearts are heavy, our family is so grateful, so fortunate to have had such an exceptional example of a human being in our lives. He was not only a son, brother, cousin, uncle and friend, he was our teacher. The lessons Joel gifted us in his 68 years are worth their weight in gold. Among them are: Listen to the gospel of The Beatles! Take a sad song and make it better. Don’t let anything stop you from getting on the dancefloor. Grab the mic if you’ve got something to say. Don’t waste time with self-pity. Don’t let others impose limitations on you and especially don’t limit yourself!

Hello hello beloved. We don’t say goodbye, we say hello. For ob la di ob la da, life goes on, eternal life goes on and we will be reunited once more.

PS We love you!

Private memorial services to take place due to current restrictions. Please send flowers to Healey Mortuary or, in lieu of flowers, please make a donation in Joel’s honor to your favorite charity that benefits people with disabilities.

To send flowers to the family or plant a tree in memory of Joel Ruiz, please visit Tribute Store

Share Your Memory of
Joel
Upload Your Memory View All Memories
Be the first to upload a memory!
Share A Memory
Send Flowers