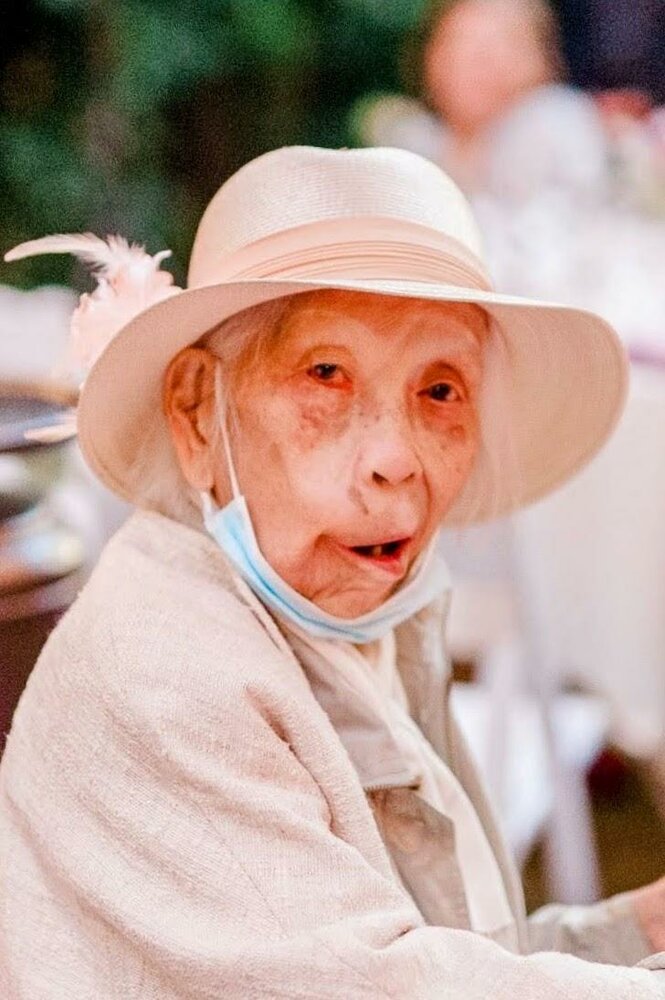 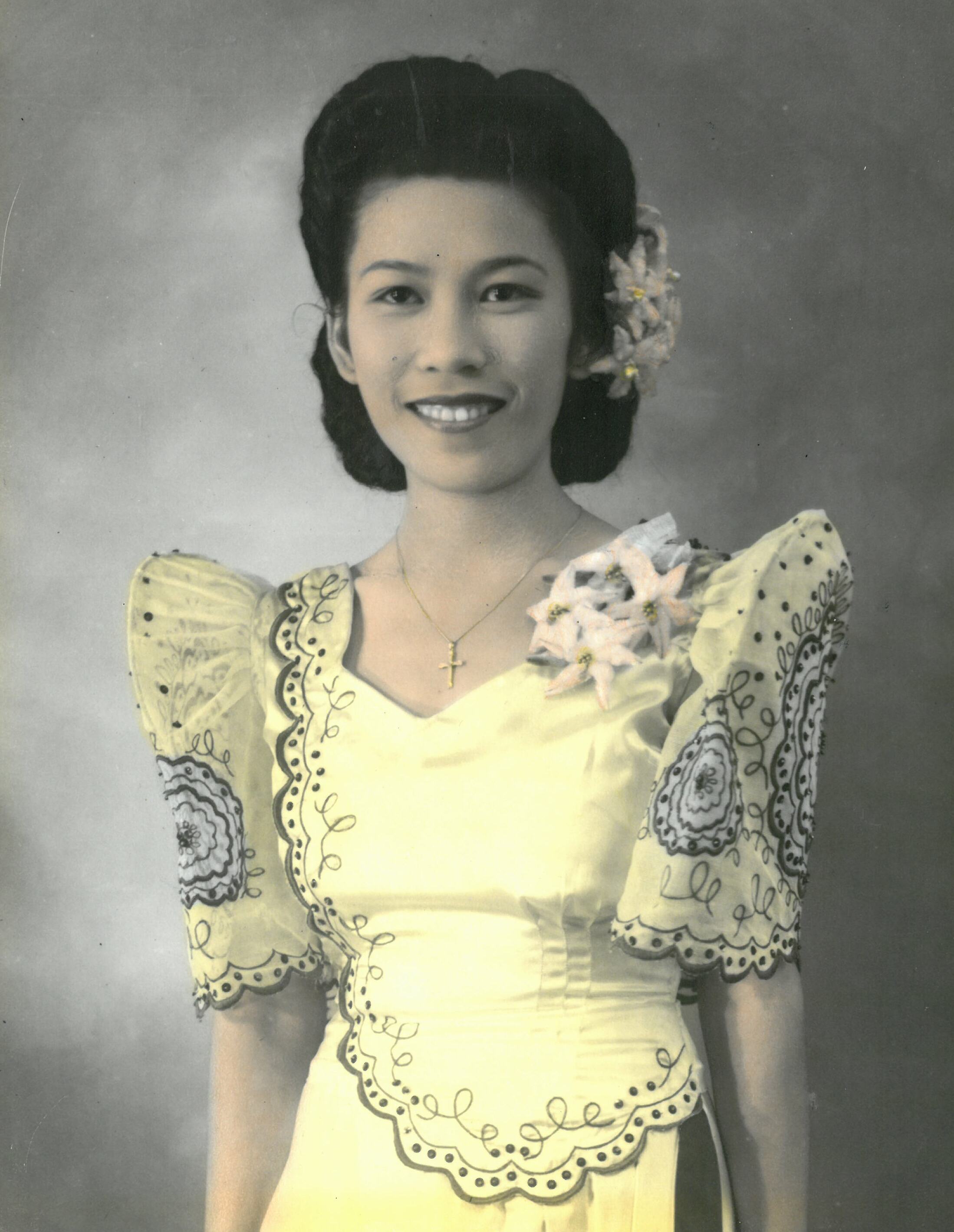 Sherry E. Aremas of Salinas, passed away peacefully, surrounded by her family at her home on October 20, 2021. She died at the age of 102 due to complications from a fall.  She was a resident of Salinas for 74 years. She was born on September 3, 1919 in Sta. Elena, Samar, Philippines to Apolonio and Soledad Estojero and was named Serapia Bernal Estojero.

Sherry's "herstory" was told in an interview by Stacey Anne Salinas, author of "Pinay Guerilleras The Unsung Heroics of Filipina Resistance Fighters During the Pacific War". It tells of disruption of Serapia’s life in the 1940’s due to the growing tensions in the Pacific.  She was recruited by the local Filipino guerilla resistance against the Japanese forces as an undercover guerilla in 1943.  When the war broke out, she was a college student, but she went back home to Tacloban, Leyte to continue to support the war effort by volunteering to distribute supplies to local families.  It was there she met her husband-to-be, a U.S. Army supply sergeant named Ricardo Aremas, who was assigned to the Allied supply warehouse.  Within a few months of courtship, Ricardo and Serapia were married on December 3, 1945. When applying for their marriage license, Ricardo decided to change Serapia's name to “Sherry” because “Serapia” might be too difficult for Americans to pronounce and spell!  Ricardo returned to Salinas, CA to secure a job and place for his new war bride. In the meantime, he funded Sherry's studies at Samson Fashion College of Manila, where she graduated as a fashion designer and professional seamstress. Later, Ricardo returned to bring Sherry to the United States by a cargo ship, the USS Meigs in 1947.  Due to the Nationality Act of 1940, Filipinos who served in the American Forces could become U.S. citizens.  Ricardo became a naturalized American citizen, thus including Sherry to remain united with him in the U.S.

They settled in Salinas, CA, and in 1948 their daughter, Susan Kay, was born. Sherry became a homemaker and because of her talent and skills as a dress designer and seamstress, she began sewing traditional Filipino gowns for the local women for special Filipino occasions and social events.  She passed on these skills to her daughter and taught her about Filipino culture.  Because of her passionate and creative personality, she developed many other skills.  She became a licensed cosmetologist [graduated from Salinas Beauty College], and a professional cake decorator [she won many awards and prizes].  She was well-known for her wedding cakes and specialty cakes.  She had many hobbies that involved anything to do with her hands.  She was skilled at all the embroidery arts – cross-stitching, crewel work, needlepoint, and mastered crocheting, knitting, tatting, broomstick lacing, and quilting.  Her creations are works of art.

Sherry was an active member of many Filipino organizations, such as the Filipino Women's Club of Salinas in Monterey County (a Life member for more than 60 years), and the Filipino Community of Salinas Valley, Inc. (Life member).  She outlived other organizations which are no longer in existence, such as the Pangasinan Organization of Central California, Fil-Am Civic League (Life member), American Legion Auxiliary Fil-Am Post 652 of Salinas, and the Filipino-American Catholic Association of Salinas.
Sherry is survived by her only daughter, Susan Aremas, a niece (her sister's daughter), Leonora Lacaba Magallanes and daughter Katherine Magallanes, and leaves many members of a very large and growing extended Filipino family made up of her husband's side.  Sherry helped raise her grand nephews, John Rentar and the late Chuck Rentar.  She also has a hand in caring for her grand niece, Magda “Twiggy” Arimas, who cared for her Lola during the last days of her life.  Her grand nephew, Flor Arimas, and his wife Evelyn were always there ready to help in every way possible. She was loved and respected by all the Arimas and Rentar families whose names are too numerous to mention here.

She was preceded in death by her husband, Ricardo Rentar Aremas. They were married for 47 years before his passing.  She now joins her parents, Apolonio and Soledad Estojero, all her older siblings, Inocencio, Pastora (and her twin sister, Barbara, who died in childhood), Cresencia, Felipe (nicknamed Babay Peping), and Florencia.

She was our pillar of strength, our inspiration, our example of longevity.  We can boast that we knew someone who was 102 years old!  Our family gatherings meant a lot to Sherry, also known as Auntie, Lola, and “Nanny”. She will be missed.

Our family would like to thank all the staff of the E.R. and Med. /Surgical units of Natividad Medical Center who had a part in her care.  You truly are “angels”.

To send flowers to the family or plant a tree in memory of Sherry Aremas, please visit Tribute Store