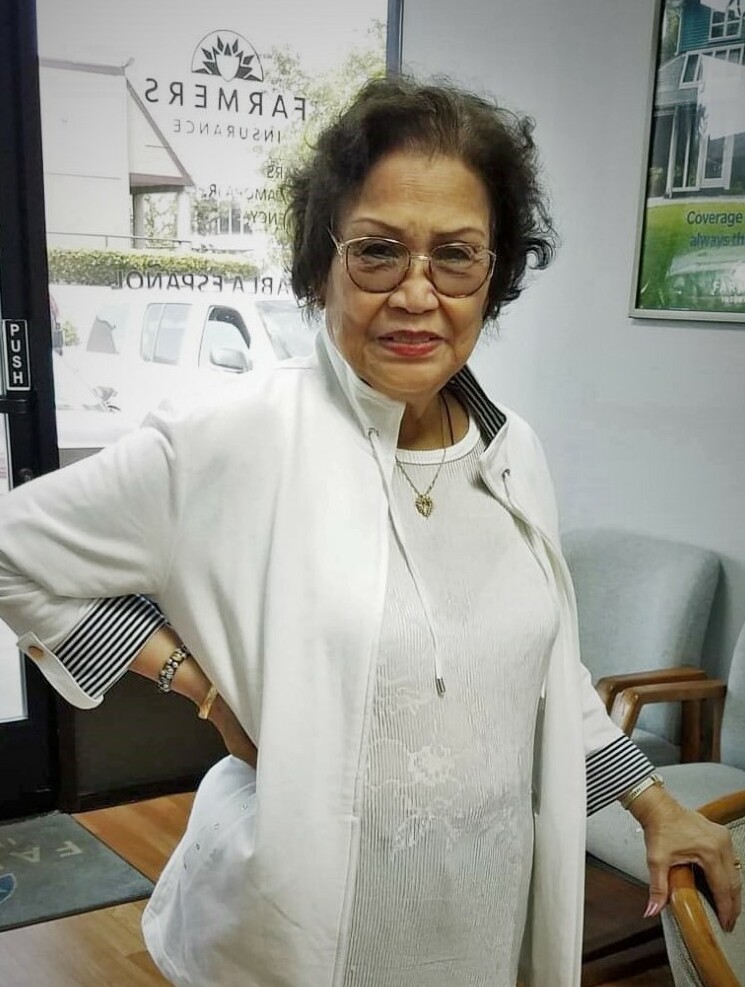 Elena “Elaine” “Rocky” Foronda Rocamora, 89, of Salinas passed away early on Tuesday morning, January 25, 2022 at Windsor Skyline Care Center. She was born on July 31, 1932 in Santa, Illocos Sur, Philippines to Sancho Aquino and Vicenta de Peralta Foronda and was the third of their four children. She also had two siblings from her father’s 2nd marriage to Faustina Delizo Foronda.

Elena attended Immaculate Conception College in Vigan then attended Manila Central University (MCU) graduating with her Nursing degree on February 27, 1957. After graduation, Elena worked at the First National Royal Insurance Group in Escolta, Manila for 3 years as a company nurse. In 1960, she traveled across the world to Philadelphia, Pennsylvania and worked at Wills Hospital, completing a Post Graduate Course in Ophthalmic Nursing after six months, Elena also earned a degree Bachelor of Science in Nursing (BSN)

Upon completion of her nursing courses in Philadelphia, Elena traveled across the country to Delano, California to live with her uncle, Dan “Grandpa Danny” Foronda while working at Delano Hospital. It was in Delano that she met her husband, Marcelino “Mars” Malineza Rocamora. They married on May 24, 1962 and had their first child, Zenaida, in January 1963 before moving and settling in Salinas with the other members of the Rocamora Family. Elena began her nursing career at Salinas Memorial Hospital before transferring to Natividad Medical Center where she retired in September 1997 after 33 years.

Elena enjoyed doing word puzzles, watching Filipino soap operas, crocheting for anyone and everyone, and talking about her growing family. Elena was a lifetime member of the Filipino Community and The Filipino Women’s Club of Salinas which she was also past President in 1984, Elena was also Past President of the Filipino American Catholic Association of Salinas, and a member of the Barangay Lions Club and the Fi-Am Civic League of Salinas. Elena especially enjoyed spending time with her children, grandchildren and great grand children and loved going on trips with them.

To send flowers to the family or plant a tree in memory of Elena Rocamora, please visit Tribute Store

Share Your Memory of
Elena
Upload Your Memory View All Memories
Be the first to upload a memory!
Share A Memory
Send Flowers
Plant a Tree