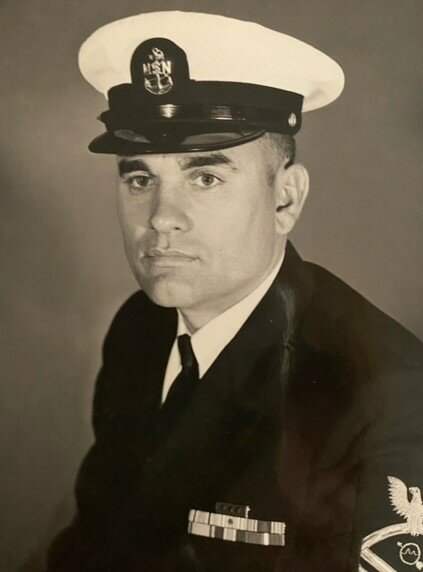 Wilbur Ralph House passed away quietly at home in Seaside, California, on March 24, 2022 at the age of 95½ with his loving wife of 32 years, Melitta House, by his side.

Known by “Bill” in the earlier part of his life and “Will” in the latter, Wilbur was born in Augusta, Kansas on September 16, 1926 to mother, Agnes House and father, Irl House. Enlisting in the Navy at the age of 17, he served three tours in WWII and achieved the rank of Senior Chief Operations Specialist. Serving on multiple destroyers and a radar picket ship, he visited over 33 nations notching more than 100,000 miles at sea during his 20 year career. He was a helmsman and radar specialist who could name aircraft by their silhouette. In 1957, he became a Radar and Electronics Instructor at the Naval Post Graduate School. He was credited with redesigning the ship's Combat Information Center, correcting a radar installation flaw that improved targeting, and involvement in top secret anti-submarine warfare.

In 1965, after his honorable discharge, he joined the Monterey County Sheriff's Department where he patrolled Carmel Valley and Big Sur, was a member of the Search and Rescue team and served as bailiff for Superior Court Judge Gordon Campbell. He retired in 1979.

A devout Christian, he was a member of The Truth. He loved the Lord and believed in Jesus. He was known for his ability to fix just about anything. He loved to tinker and fix cars to resell. In retirement, he was athletic, putting on diving exhibitions. He enjoyed traveling in his RV to visit friends and family across the country, even going to Germany. He enjoyed aviation, including the Reno Air Races, collecting coins, and walking around the neighborhood for exercise. But, most of all, he enjoyed having his family visit.

A celebration of Life will be held at Healey Mortuary on Friday, April 29, 2022 at 1:00pm followed by a Military ceremony and interment at California Central Coast Veterans Cemetery at 3:30pm.

To send flowers to the family or plant a tree in memory of Wilbur House, please visit Tribute Store
Friday
29
April

Share Your Memory of
Wilbur
Upload Your Memory View All Memories
Be the first to upload a memory!
Share A Memory
Send Flowers
Plant a Tree