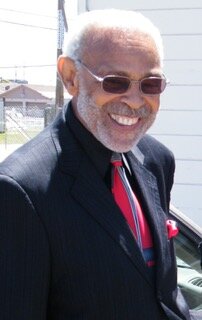 Johnnie L. Welch (85) peacefully transitioned to his eternal home on Sunday, June 19, 2022, with his wife of 32 years, Terry Wells-Welch by his side. The second of six children to bless his parents Cleties and Isabella Welch, Johnnie was born on April 24, 1937, in Chowan County, NC.

Johnnie’s parents moved their young family to Norfolk, VA and made their home in the Montana Apartments. As a child, Johnnie’s complexion and hair color were reddish; so, Johnnie was given the nickname “Montana Red” by friends in the neighborhood. He left home at the age of 17 with his parent’s permission to join the U.S. Army. The Army afforded Johnnie the opportunity to travel and see the world and for many years he was stationed in Germany. Upon his return to the United States his home base became Fort Ord in California. Johnnie had varying jobs during his military service. The military job he was most proud of was as instructor for the military officers on Fort Ord. After faithfully serving his country for nearly 24 years, in 1978 he retired from the Army and decided to settle down and make California his home where he resided for over 50 years.

In his new heavenly home, Johnnie joins his family that have gone before him: his parents Cleties and Isabella Welch, 3 sisters, Mary “Peaches” Boone, Fruzie “Piggy” Edwards, Evelyn Cousins, and his nephew Wardell Edwards, Jr. He leaves behind to cherish his memory his loving and devoted wife, Terry Wells-Welch, his daughter, Melony Welch, his brother M. Llyod (Joyce) Welch, his sister, Juanita (Willie) Smith, 6 nephews, 4 nieces, and a host of other family and friends.

To send flowers to the family or plant a tree in memory of Johnnie Welch, please visit Tribute Store
Friday
1
July

Share Your Memory of
Johnnie
Upload Your Memory View All Memories
Be the first to upload a memory!
Share A Memory
Send Flowers
Plant a Tree