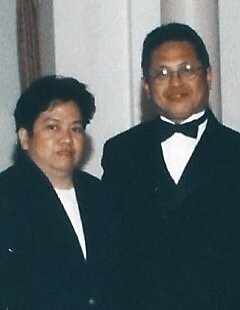 On 3/19/2022, Silvano Cadenas Galendez and Maria Rebecca Lizardo Galendez lives ended unexpectedly in a tragic motor vehicle accident in Hollister, California. The couple married in March of 1991. During their 31 years together, they enjoyed many things including shopping and gambling together. Prior to their tragic death, they were almost home returning from a casino.

Silvano aka Baning and Van was born on 2/10/1951 in Tabuan Garcia Bohol, Philippines to his late parents, Paulino Taer Galendez and Natividad Madelo Cadenas. He was one of only 2 sons, his brother Adolfo Galendez died in his early 50s. Silvano immigrated to the USA in the early 1970s and landed his first occupation in agriculture side by side with his parents. He shortly married his former wife and had 2 children, Karen and Bill. He worked hard and learned countless trades including auto body repair and paint and was employed with local Salinas companies such as Cambridge and Firestone. He lastly retired with Olam Foods as a machine operator where he worked for over 30 years. During his earlier years, he enjoyed fishing and playing basketball at the Laurel Heights Park but mainly enjoyed fixing things from auto to home repair and gardening. He was a Boston Celtic’s fan and a Raider’s fan. He was a dedicated, loving and tolerant father and husband and enjoyed watching his granddaughter play softball. Silvano was a soft-spoken, funny and laid-back man and was always available for a helping hand.
He will be truly missed by his only living child, Karen Stone, son in law, Keven Stone, and two granddaughters, Kayla and Kaycee Stone, all from Gilroy and great Uncle and Aunt, Danny and Linda Galindez from Santa Nella. His death precedes his son, William Kevin Galendez, his brother, Adolfo Galendez and his parents.

Rebecca was born on 9/12/1963 in Rizal, Philippines to her late parents, Rafael Lizardo and Gloria Ocampo. She as well was one of 2 children. She completed her nursing education in the Philippines and immigrated to the USA in 1988 and lived in New Jersey. She shortly married Silvano shortly after and passed her NCLEX. Rebecca has been a Registered Nurse for over 30 years and always enjoyed working the NOC shift. She had numerous strong connections with her coworkers/friends that she was like a second mother to many. She worked countless hours including picking up countless extra shifts. She enjoyed shopping and sending numerous items to the Philippines and had an astounding number of collectible items. Rebecca was a loving, kind and generous maternal woman known to all her peers.
She is survived by her extended family in the Philippines and her cousin, Julius Ocampo Rivera, San Diego, who recently arrived in the USA. Her death precedes her brother, Rafael Ocampo Lizardo, Jr and parents.
Visitation will be held Monday March 28, 2022 from 1 -5 PM at the Healey Mortuary, 405 N. Sanborn Rd., Salinas
A Rosary will be said at the Mortuary Chapel, Monday at 4:00 PM
Celebration of the Funeral Mass will be held Tuesday, March 29, 2022 at 1:00 PM at Madonna del Sasso Church, 320 E. Laurel Dr. Salinas.
Burial will follow at the Garden of Memories Cemetery, Salinas
REST IN PEACE Silvano and Rebecca Galendez. You two have made an impact on many and lived an amazing life together and will be greatly missed.

To send flowers to the family or plant a tree in memory of Silvano Galendez, please visit Tribute Store

Share Your Memory of
Silvano
Upload Your Memory View All Memories
Be the first to upload a memory!
Share A Memory
Send Flowers
Plant a Tree